March Book of The Month: True To The Game 2 by Teri Woods [See The Official Movie Trailer HERE!!!] 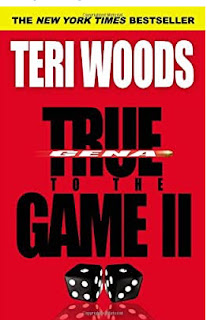 Another month has gone by and I’m back again with another book club pick!
As always I want to take the time out to thank you all for your continued support on my blog posts. I hope you all are enjoying my picks as much as I am, and as always, suggestions or comments on future books, discussions or ideas are always welcomed.
Let's Be Friends:

IG: @Sassyandclassyy
Twitter: @SassNClassBlog
Facebook: Sassy and Classy
www.sassyandclassy.net
Serious Business Inquiries: Click HERE.
For this month’s book club pick, I wanted to totally switch things up in a BIG way. For one, I wanted to delve into a genre I don’t usually read too much of. The fact that it was apart of a trilogy series of books also peaked my interest as well.

For those of you who may not know, Urban Fiction books are one of my guilty pleasures when it comes to reading. There’s something about a juicy, scandalous fictitious plot, unbelievable characters and a slew of shocking twists and unexpected turns that encompass UF novels. Whenever I dig into a good UF novel it feels as though I’m sitting down and reading a juicy long letter or gossiping through text with a girlfriend—except none of it’s real which makes the drama even more indulgent lol.

I came across seasoned Urban Fiction/Crime Thriller author Teri Woods, years ago. I was introduced to Woods’ work with probably her most infamous piece of work to date True to the Game. The crime thriller received high praise and acclaim from the reading/book community almost instantly. I remember reading Woods’ famous novel from cover to cover back in my high school days and couldn’t wait for a sequel. The book was so popular it was made into a movie recently that I, of course, ran out to see opening weekend.

A few weeks ago, when I was on social media I saw a preview of the second part—TRUE TO THE GAME II set to hit theaters this year and immediately ran to my local library to check out the second installment of the book.

As you can see from the trailer(and after reading the official summary/synopsis below) the second installment of the book series is just salacious and scandalous as the first.
Here is the official synopsis:

True to the Game II will begin where True to the Game left off, with one difference, Gena is now seeing a new guy named Jay. However, little does Gena know, but the man she has fallen in love with, so soon after Quadir’s death, is his archrival, Jerrell Jackson. Unfortunately, Jerrell is determined to get his revenge against Quadir’s crew and he’ll start with Gena. However, he isn’t the only enemy lurking. Gena has more than she bargained for in this epic sequel to an American street classic and only true love can save her or possibly destroy her. Find out if she will survive and get away with the fortune she found or if the millions she accidentally uncovered will destroy her life.

After quickly picking up the book I delved in quickly. The book was pretty short in length(about 180 pages), as most of Woods’ book series are.
Upon finishing I can say that I actually enjoyed the second book more so than the first. Woods has a way of putting together prose, trimming the fat and keeping you engaged that before you know it, you don’t even realize that you’ve read more than half the book in one sitting. The plot twists and turns didn’t fall short either. I can’t say enough good things about this book and enjoyed it SO MUCH that I can’t wait to get my hands on the third(hint hint on next month’s book club pick)!

I would definitely recommend reading this book for sure. And if you’re like me and haven’t read the first installment of the series in a while or ever, you can definitely re-read that book and then get into this one. Like I said before, the book is written so concisely and flows so easily you can quickly get through it and on to the next!