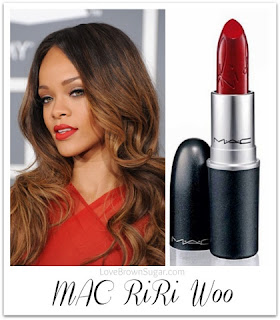 After officially announcing her makeup line with MAC in February of this year, fans and makeup enthusiasts alike waited anxiously for Rihanna's first release of products. And now just three short months later Rihanna has just gave the world a glimpse at her first product for her line- a deep red lipstick appropriately titled 'RiRi Woo'.

The red lipstick mirrors that of Mac's popular Ruby Woo, also a red that gained popularity for its universal appeal on everyone.

The release of RiRi Woo almost seems like a given, as Rihanna is often seen rocking Ruby Woo or a similar shade on a daily basis.

RiRi Woo is available for the first time exclusively online May 2 (today) for $15(maccosmetics.com) It will also be available in person when Rihanna’s concert hits Brooklyn’s Barclays center on May 4 and 5.

To get more details on Rihanna's MAC line click here.

Will you be buying RiRi Woo?